This article uses material from the The Shadow Over Innsmouth article on the Lovecraft wiki at Fandom and is licensed under the Creative Commons Attribution-Share Alike License.

The Shadow Over Innsmouth 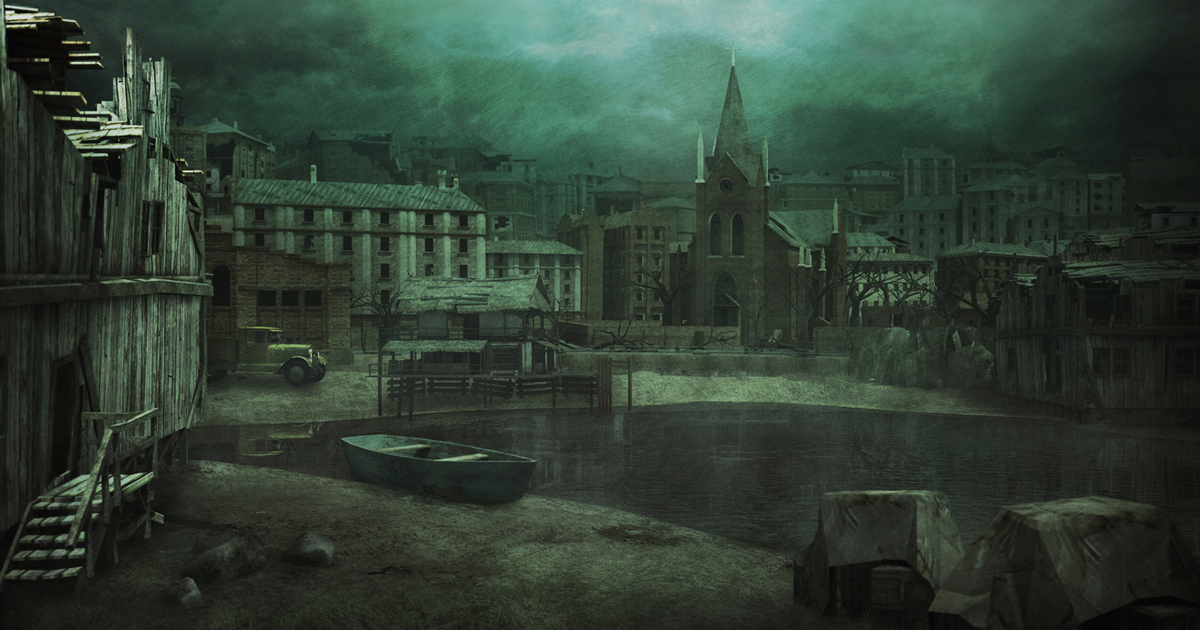 The Shadow Over Innsmouth
Read this story in the library

The Shadow over Innsmouth is a horror novella by H. P. Lovecraft, written in November–December 1931]. It forms part of the Cthulhu Mythos, using its motif of a malign undersea civilization. It references several shared elements of the Mythos, including place-names, mythical creatures and invocations.

Both of Lovecraft's parents died in a mental hospital, and some critics believe that a concern with having inherited a propensity for physical and mental degeneration—a common pre-occupation among eugenecists of the time—is reflected in the plot of The Shadow over Innsmouth. It also shares some themes with his earlier story, "Facts Concerning the Late Arthur Jermyn and His Family".Cthulhu, an entity from previous Lovecraft stories, is the overlord of the sea creatures. The mind of the narrator deteriorates when he is afforded a glimpse of what exists outside his perceived reality. This is a central tenet of Cosmicism, which Lovecraft emphasizes in the opening sentence of "The Call of Cthulhu": "The most merciful thing in the world, I think, is the inability of the human mind to correlate all its contents."

The story is divided into five chapters. In the first chapter, the narrator begins by recounting to the reader of a secret investigation that was undertaken by the government at the ruined town of Innsmouth, Massachusetts, and that the story told to them by the narrator himself is the reason for this investigation. He proceeds to describe in detail the events surrounding his initial interest in the town (antiquarian and architectural), which lies along the route of his tour across New England, taken when he was twenty-one. While he waits for the bus that will take him to Innsmouth, he busies himself in the neighboring town of Newburyport by gathering information from local townsfolk; all of it with superstitious overtones.

The second chapter details his ride into Innsmouth, described in great detail as a crumbling, mostly deserted town full of dilapidated structures and people who look just a bit odd and who tend to walk with a distinct shambling gait. All of this is offputting to the narrator, who describes the people as having the "Innsmouth look", "queer narrow heads with flat noses and bulgy, stary eyes". Only one person in town appears normal, a young clerk at the local First National grocery store who comes from neighbouring Arkham. The narrator gathers much information from the clerk, including a map of the town and the name of a local who might be a good source of information: an ancient man named Zadok Allen, known to open up about the town when plied with drink.

The majority of the third chapter is composed of the conversation between Zadok and the narrator. Zadok, who is very old, has seen much in the town and goes on at length, telling a tale of fish-frog men known as Deep Ones who live beneath the sea. It seems they bring prosperity in the form of fish as well as fantastically wrought gold jewelry to those who offer them human sacrifice. These fish-frog men are amphibious and are able to mate with humans. The hybrid brood have the appearance of normal humans in early life but, in adulthood, slowly transform into Deep Ones. The completed transformation brings them eternal life, which they live in cities under the sea. These fish-frog men were first discovered in the Indies by a native island tribe, which was itself found by an Innsmouth merchant named Obed Marsh. When hard times befell Innsmouth, Obed and some followers did what they could to call up the fish-frog men in their New England town, causing an increase in the town's wealth. However, Obed and his minions were apprehended by the authorities and the remaining Innsmouth residents balked at the idea of sacrificing humans to the Deep Ones. Outraged, the Deep Ones attacked the town one night and slaughtered more than half its population; the survivors were left with no choice but to offer human sacrifices to the Deep Ones and also women to mate with them. The countless deaths were blamed on an unknown plague. Zadok is at first angry that the narrator appears not to believe him. After seeing strange waves approach the dock, he becomes frightened and tells the narrator to leave town because they have been seen. The narrator leaves and Zadok disappears and is never seen again. When the story is over, the narrator is unnerved but thinks it a product of a fertile imagination.

Chapter four tells of the night that the narrator was forced to spend in town, after being told that the bus in which he came to town is experiencing engine trouble. The narrator has no choice but to spend the night in a musty hotel. While attempting to sleep, he hears noises at his door like someone trying to enter. Wasting no time, he attempts to escape out a window and through the streets, at times imitating the peculiar walk of the Innsmouth locals. Eventually he makes his way to some train tracks where he hears a great many creatures passing in the road before him. He hides and resolves to close his eyes, having at this point come to accept the idea that Zadok's story is true. He cannot keep them closed, however, and upon seeing the fish-frog creatures in full light for the first time, faints in his hiding spot.

In the final chapter, we hear of how the narrator wakes up unharmed and quickly walks to the next town (Rowley). Over the years that pass, he begins doing research into his family tree, discovering some disturbing information along the way. Eventually it becomes clear that he is a descendant of Obed Marsh himself and nightmares accompany the narrator's realization that he is changing into one of the creatures. As the story ends, the narrator, by then a student at Oberlin College, tells us that his horror at the idea is changing into acceptance, and that he will be quite happy living forever in the city Y'ha-nthlei, deep beneath the sea. He also has a cousin, even further transformed than he, being held in a mental hospital whom he plans to break free and take with him. The narrator believes Y'ha-nthlei has survived its apparent destruction by the authorities, but it is unclear whether this is the case or merely a by-product of his descent into madness.

A peculiar driver of a run-down bus in Innsmouth with such large feet the narrator wondered how he was able to find shoes that fit.

An H. P. Lovecraft Encyclopedia notes that Allen resembles—and shares his years of birth and death with—Jonathan E. Hoag, an amateur poet of Lovecraft's acquaintance. A possible literary inspiration is the character of Dr. Humphrey Lathrop in Herbert Gorman's The Place Called Dagon (1927), who, like Allen, is a drinker who knows the secret history of his town.

Lovecraft was quite critical of The Shadow over Innsmouth, writing to August Derleth that the story "has all the defects I deplore—especially in point of style, where hackneyed phrases & rhythms have crept in despite all precautions.... No—I don't intend to offer 'The Shadow Over Innsmouth' for publication, for it would stand no chance of acceptance."

The story was rejected by Weird Tales editor Farnsworth Wright when Derleth surreptitiously submitted it for publication in 1933. "I have read Lovecraft's story...and must confess that it fascinates me," he wrote to Derleth. "But I don't know just what I can do with it. It is hard to break a story of this kind into two parts, and it is too long to run complete in one part."

In late 1935,William L. Crawford's Visionary Publishing Company began the process of issuing The Shadow Over Innsmouth as a book. The project came to fruition in November 1936 (although the copyright page declares the date of publication as April 1936), but the book had so many typographical errors that Lovecraft insisted on an errata sheet (which was also faulty). It had a bound run of 200 copies — the only book of Lovecraft's fiction distributed during his lifetime. Crawford had printed 400 copies but bound only 200; the others were destroyed later. Of this edition Robert Weinberg has written: "Only a few hundred copies of the book were printed, and even less than that were sold, even though it was available at the bargain price of $1 per copy. It featured good paper, black linen binding and four illustrations by Frank Utpatel. The book was the only bound hardcover to appear during Lovecraft's lifetime and became one of the true rarities in the collecting field. Its failure, and the poor sales of third non-fantasy book convinced William Crawford of the futility of his efforts."

After Lovecraft's death (and Wright's), the story appeared in an unauthorized abridged version in the January 1942 issue of Weird Tales.

The Shadow over Innsmouth was republished in an anthology with stories by other authors based on Innsmouth and the Old Ones in Shadows over Innsmouth. The collection was edited by Stephen Jones, and included contributions by Neil Gaiman, Ramsey Campbell, David SuttonTemplate:Dn, Kim Newman (both as himself and Jack Yeovil), and other authors.