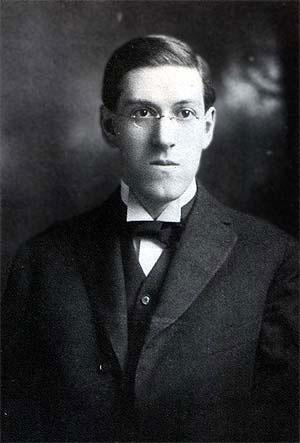 Now all my tales are based on the fundamental premise that common human laws and interests and emotions have no validity or significance in the vast cosmos-at-large. To me there is nothing but puerility in a tale in which the human form—and the local human passions and conditions and standards—are depicted as native to other worlds or other universes. To achieve the essence of real externality, whether of time or space or dimension, one must forget that such things as organic life, good and evil, love and hate, and all such local attributes of a negligible and temporary race called mankind, have any existence at all. Only the human scenes and characters must have human qualities. These must be handled with unsparing realism, (not catch-penny romanticism) but when we cross the line to the boundless and hideous unknown—the shadow-haunted Outside—we must remember to leave our humanity and terrestrialism at the threshold.

His parents were Winfield Scott Lovecraft, a traveling salesman for Gorham Manufacturing Company, a large silver-plate and sterling company and Sarah Susan Phillips Lovecraft whose eccentric and sheltering behavior likely profoundly contributed to Lovecraft’s shut-in nature in adulthood. When Lovecraft was three his father had a mental break in a hotel room in Chicago of which the cause is not certain but evidence suggests that it was paresis, a form of neurosyphilis. He was brought back to Butler Hospital, where he remained paralyzed and comatose for five years before dying on July 19, 1898. Lovecraft’s early childhood despite showing profound intelligence (reciting poetry at age two, reading at age three, and writing at age six or seven) was marred by frequent sickness and was withdrawn from school after attending for only a year due to illness. He was raised by his mother his, two aunts and his grandfather – businessman and industrialist Whipple Van Buren Phillips.

At the encouragement of his grandfather he consumed many classic tales such as Arabian Nights, which he read by the age of five; it was then that he adapted the pseudonym of “Abdul Alhazred, The Mad Arab” who later became the author of the cursed Necronomicon. His interests in the Arabian were discarded in favor of the Greek mythology, gleaned through Bulfinch’s Age of Fable and children's versions of the Iliad and the Odyssey.

The earliest known work “The Poem of Ulysses” (1897), is a paraphrase of the Odyssey in 88 lines of internally rhyming verse. His grandfather fostered and interest in the weird and gothic, by entertaining Lovecraft with off-the-cuff weird tales in the Gothic mode. Due to his physical and perhaps mental illness Lovecraft spent much of his time alone reading and learning independent of a formal education. By eight he had discovered science, first chemistry, then astronomy.

He began to compiling journals that contained scientific articles made by using gelatin and special ink to copy the original namely, The Scientific Gazette (1899–1907) and The Rhode Island Journal of Astronomy (1903–07), which were distributed amongst his friends. When he was finally able to enter high school he developed several long-lasting friendships with boys of his age and made his first appearance in print in 1906, when he wrote a letter on an astronomical matter to The Providence Sunday Journal. He began writing columns for several papers.

In 1904 his grandfather died, and mismanagement of his estate left his family in a poor financial situation, and they were forced to move into much smaller accommodations from their lavish and comfortable Victorian home. Losing his home was incredibly hard on the sheltered adolescent Lovecraft and apparently contemplated suicide.

In 1908 just before his graduation from high school, he suffered a nervous breakdown that forced him to leave school without graduating and blocked his acceptance to Brown University. Not achieving his goals in education were sources of great shame to Lovecraft in later years, although he was thought to be a formidable autodidact.

From 1908 to 1913 Lovecraft falls disappears from history, mostly pursuing his interests in astronomy and poetry. During this period and due to the cramped and isolated nature of his living circumstance he unhealthily close relationship with his mother, who was still suffering from the trauma of her husband’s illness and death, and who developed a pathological love-hate relationship with her son.

Lovecraft broke his silence in a 1300 word letter in the Argosy mocking the pulp writer Fred Jackson whose love stories were intermingled with the weird tales and science fiction:

To such as these are the fictions of Jackson well suited; but these, methinks, are not the average readers of The Argosy. The latter prefer, I am sure, a sprightlier sort of story, where acts of valor are more dwelt upon than affairs of Venus. For mine own part, I have ever preferred the Aeneid of Virgil to the Ars Amatoria of Ovid. Apart from the mere choice of subject, let me venture to describe the Jacksonine type as trivial, effeminate, and, in places, wane. The author remarks the costumes of his heroines with the minute attention of a mantua-maker and describes the furnishings and decorations of their apartments like a housewife or chamber-maids

Readers and fans of Fred Jackson were incensed and responded in kind:

If he would use a few less adjectives and more words which the general public arc familiar with than labyrinthine, laureled, luminary, lucubration, and many others… I get sore at people like H. P. L. I will pay his fifteen cents a month if he will quit reading Argosy. Jackson is great… I am a cow-puncher, and certainly would like to loosen up my .44-six on that man Lovecraft. Yours for luck. Excuse pencil, as ink is scarce at the Bijou Ranch.

Lovecraft retaliated with a poem mocking Jackson and his fans:

The debate continued with Lovecraft responding primarily in mocking heroic couplets. Lovecraft was noticed by Edward F. Daas who was president of the United Amatuer

Edward F. Daas, President of the United Amateur Press Association (UAPA), a group of mostly amateur writers from around the country who wrote and published pulp magazines. Edward Daas invited Lovecraft to join the UAPA, and Lovecraft did so in early 1914.

Later Lovecraft became President and Official Editor of the UAPA, and served briefly as President of the rival Nation Amateur Press Association (NAPA). According to a quote by Lovecraft being offered membership to the UAPA may have been the only thing that prevented his disappearance from a public eye:

"In 1914, when the kindly hand of amateurdom was first extended to me, I was a close to the state of vegetation as any animal well can be ... With the advent of the United I obtained a renewal to live; a renewed sense of existence as other than a superfluous weight; and found a sphere in which I could feel that my efforts were not wholly futile. For the first time I could imagine that my clumsy gropings after art were a little more then faint cries lost in the unlistening world."

It was in the amateur world that Lovecraft began writing after abandoning fiction writing in 1908. Lovecraft published thirteen issues of his own paper, The Conservative (1915–23), as well as contributing poetry and essays to many other journals. W. Paul Cook and others, noting the promise shown in such early tales as "The Beast in the Cave " (1905) and "The Alchemist" (1908), urged Lovecraft pen fiction again, which resulted in the writing "The Tomb" and "Dagon" in quick succession in the summer of 1917.

The one test of the really weird is simply this—whether or not there be excited in the reader a profound sense of dread, and of contact with unknown spheres and powers; a subtle attitude of awed listening, as if for the beating of black wings or the scratching of outside shapes and entities on the known universe’s utmost rim.