This article uses material from the The Whisperer in Darkness article on the Lovecraft wiki at Fandom and is licensed under the Creative Commons Attribution-Share Alike License.

The Whisperer in Darkness 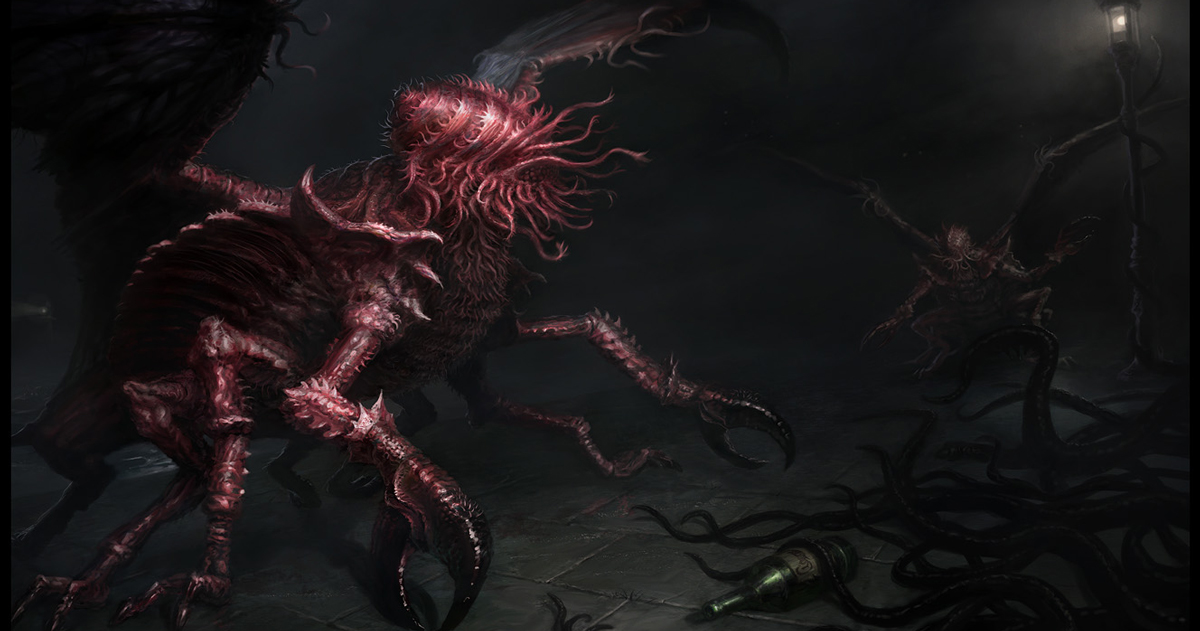 The Whisperer in Darkness
Read this story in the library

"The Whisperer in Darkness" is a short story by H. P. Lovecraft. Written February-September 1930, it was first published in Weird Tales, August 1931. Similar to "The Colour Out of Space" (1927), it is a blend of horror and science fiction. Although it makes numerous references to the Cthulhu Mythos, the supernatural does not figure in the plot. The story also introduces the Mi-Go, an alien race of fungoid creatures.

In "The Whisperer in Darkness", narrator Albert Wilmarth initially dismisses those who believe that nonhuman creatures inhabit the Vermont hills as "merely romanticists who insisted on trying to transfer to real life the fantastic lore of lurking 'little people' made popular by the magnificent horror-fiction of Arthur Machen."

This line, Lovecraft scholar Robert M. Price argues, is an acknowledgement of the debt Lovecraft's story owes to Machen's "The Novel of the Black Seal" (1895).

"I would go so far as to make Lovecraft's tale essentially a rewriting, a new version of Machen's," Price writes.

In both cases we have a professor, an antiquarian, following his avocational interests in what most would dismiss as superstition on a dangerous expedition into a strange region of ominous domed hills. He is lured by a curiously engraved black stone which seems a survival from an elder prehuman race now hidden in those mysterious hills.... Lovecraft splits the role of Machen's Professor Gregg between Professor Wilmarth and the scholarly recluse Akeley.... [I]t is Akeley, not the Professor, who eventually disappears into the clutches of the elder race. Wilmarth remains behind to tell the tale, like Machen's Miss Lally. Price points out parallel passages in the two stories: Where Machen asks, "What if the obscure and horrible race of the hills still survived...?"

Lovecraft hints at "a hidden race of monstrous beings which lurked somewhere among the remoter hills". Where Machen mentions "strange shapes gathering fast amidst the reeds, beside the wash in the river," Lovecraft tells of "certain odd stories of things found floating in some of the swollen rivers." Price suggests that Machen's reference to accounts of people "who vanished strangely from the earth" prompted Lovecraft to imagine people being literally spirited off the Earth.

As noted by critics like Price and Lin Carter, "The Whisperer in Darkness" also makes reference to names and concepts in Robert W. Chambers's The King in Yellow, some of which had previously been borrowed from Ambrose Bierce. In a letter to Clark Ashton Smith, Lovecraft wrote that "Chambers must have been impressed with 'An Inhabitant of Carcosa' and 'Haita the Shepherd', which were first published during his youth. But he even improves on Bierce in creating a shuddering background of horror--a vague, disquieting memory which makes one reluctant to use the faculty of recollection too vigorously."

The story is told by Albert N. Wilmarth, an instructor of literature at Miskatonic University in Arkham. When local newspapers report strange things seen floating in rivers during a historic Vermont flood, Wilmarth becomes embroiled in a controversy about the reality and significance of the sightings, though he sides with the skeptics. Wilmarth uncovers old legends about monsters living in the uninhabited hills who abduct people who venture or settle too close to their territory.

He receives a letter from one Henry Wentworth Akeley, a man who lives in an isolated farmhouse near Townshend, Vermont. He affirms that he has proof that will convince Wilmarth that he is wrong. From this point on, most of the story involves the exchange of letters between the two characters. Through their correspondence, we learn of the existence of an extraterrestrial race of monstrous beings that have an outpost in the Vermont hills where they mine a rare metal. They have no interest in the human race and usually hide from people. Nonetheless, they ruthlessly defend their outpost and their secrecy, often employing human agents with whom they have made secret pacts.

The aforementioned agents intercept Akeley's messages and proceed to harass his farmhouse on a nightly basis. The two eventually exchange gunfire, killing many of Akeley's guard dogs. Although Akeley expresses more worry in his letters, he abruptly has a change of heart. He writes that he has met with the extraterrestrial beings and has learned that they are a peaceful race. Furthermore, they have taught him of marvels beyond all imagination. He urges Wilmarth to pay him a visit and to bring along the letters and photographic evidence that he had sent him. Wilmarth reluctantly consents.

Wilmarth arrives to find Akeley in a pitiful physical condition, immobilized in a chair. Akeley tells Wilmarth about the extraterrestrial race and the wonders they have revealed to him. He also says that the beings can surgically extract a human brain and place it into a canister wherein it can live indefinitely and withstand the rigors of outer space travel. Akeley says that he has agreed to undertake such a journey and points to a cylinder bearing his name.

During the night, a sleepless Wilmarth overhears a disturbing conversation. When he investigates, he makes a horrifying discovery. He then runs from the farmhouse, steals Akeley's car, and flees to Townshend. When the authorities investigate the next day, all they find is a bullet-ridden house. Akeley has disappeared, along with all the physical evidence of the alien presence.

As the story ends, Wilmarth recounts the horror that drove him from the Akeley farmhouse. When he went to the chair where Akeley had sat, he found only his disembodied face and hands, revealed to be sophisticated mechanical facsimiles. He realized that it was not Akeley who had sat in the chair and conversed with him, but one of the aliens in disguise. And all the while, Akeley's brain had rested in the named cylinder.