This article uses material from the The Hound (short story) article on the Lovecraft wiki at Fandom and is licensed under the Creative Commons Attribution-Share Alike License. 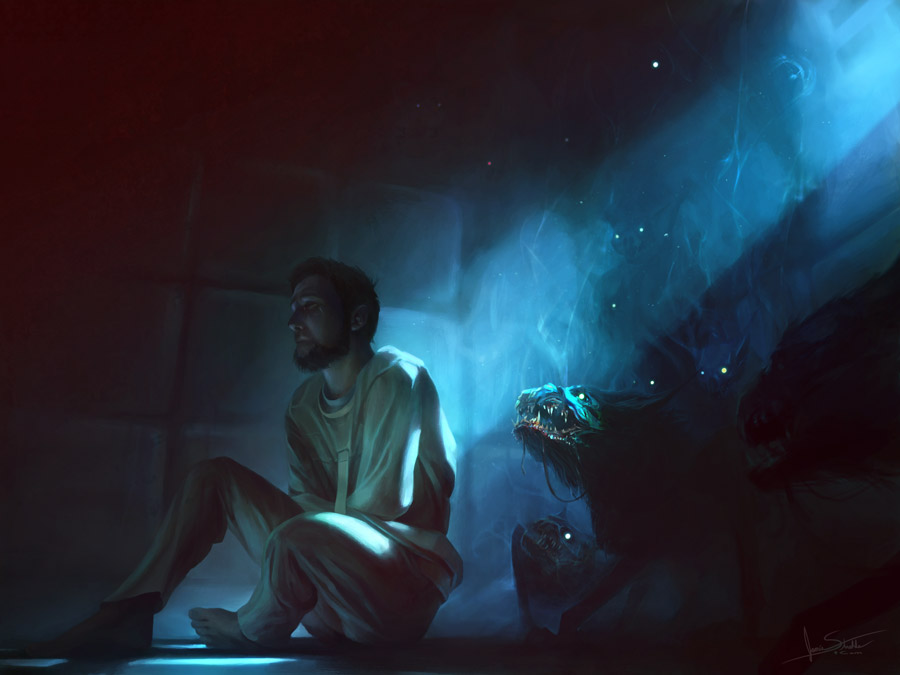 The Hound
Read this story in the library

"The Hound" is a short story written by H. P. Lovecraft in September 1922 and published in the February 1924 issue of Weird Tales. It contains the first mention of Lovecraft's fictional text the Necronomicon.

On September 16, 1922, Lovecraft toured the Flatbush Reformed Church in Brooklyn with his friend Rheinhart Kleiner, writing about the visit in a letter:

Lovecraft wrote "The Hound" shortly afterwards, using as the name of one of the main characters his nickname for his companion Kleinhart, "St. John". The grave that is fatefully robbed in the story is in a "terrible Holland churchyard"—perhaps a reference to Flatbush church being part of the Dutch Reformed Church (although the story is actually set in the Netherlands, as well as in England).

Critic Steven J. Mariconda suggests that the story is a tribute to the Decadent literary movement in general and in particular Joris-Karl Huysmans' A rebours, an 1884 novel that Lovecraft greatly admired. (Huysmans is mentioned by name in the story, along with Baudelaire.) Like "The Hound"'s protagonists, victims of a "devastating ennui", the main character of A rebours suffers from an "overpowering tedium" that leads him to "imagine and then indulge in unnatural love-affairs and perverse pleasures."

Though Lovecraft chose "The Hound" as one of the five stories he initially submitted to Weird Tales, his main professional outlet, he later dismissed it as "a dead dog" and "a piece of junk"

Some critics have shared Lovecraft's deprecation; Lin Carter called it "a minor little tale" that is "slavishly Poe-esque in style". But the story has its defenders; Steven J. Mariconda says it is "written in a zestful, almost baroque style which is very entertaining", while Peter Cannon, saying that it must have been written "with tongue at least partly in cheek", credits it with a certain "naive charm".

The plot of the Poppy Z. Brite short story "His Mouth Will Taste of Wormwood" bears a strong resemblance to this Lovecraft story, albeit transplanted to a modern Southern Gothic Louisiana setting.

The story focuses around the narrator and his friend St. John, who have a deranged interest in robbing graves They constantly defile crypts and often keep souvenirs of their nocturnal expeditions. Since they reside in the same house, they have the opportunity to set up a sort of morbid museum in their basement. Using the objects they collect from the various graves they have robbed, they organize the private exhibition. The collection consists of headstones, preserved bodies, skulls and several heads in different phases of decomposition. It also included statues, frightful paintings and a locked portfolio, bound in tanned human skin.

One day, they learn of a particular grave, which sparks a profound interest in them, an old grave in a Holland cemetery, which holds a legendary tomb raider within. One who was said to have stolen, many years ago, a “potent thing from an mighty sepulcher”. One night, they travel to this old cemetery where the ancient “ghoul” was buried. The thought of exhuming the final resting place of a former grave robber is irresistibly appealing to them. That, and the fact that the body had been buried several centuries before, drives them to travel such long distances to reach the site. Upon reaching the old cemetery, they notice the distant baying of a giant hound. They ignore it and begin their excavation. After a while of digging they hit a solid object in the ground. They clear the last of the dirt from it and happen upon a strange and elaborately made coffin. Upon opening the casket, they are surprised to find that after several centuries the remains are still intact. Several places, on the skeletal remains, seem torn and shattered, as if attacked by a wild animal. Yet the whole of the skeleton is still completely distinguishable. At that moment, they notice a jade amulet hanging from the “ghoul's” neck. They examine it and after a bit of observation they recognize the amulet as one mentioned in “the forbidden Necronomicon of the mad Arab Abdul Alhazred”. They immediately know they must have the amulet at all cost. They remove it from the skeleton and flee to their homes. As they do, they notice once again the continuous sound of a hound's baying in the distance.

Even as they return home, strange sounds can be heard in their house, including the distant sound of the hound. This culminates into his friend being violently attacked and killed by an unknown creature, which the narrator claims the amulet had brought unto him. He decides that he must return the amulet to its rightful owner but it is stolen from him before he can return it. The next morning he reads, in the morning paper, of a band of thieves dismembered by an unknown creature. Growing mad, he returns to the churchyard and excavates the coffin out of the earth once more, only to find the skeleton within covered in caked blood and bits of flesh and hair. The amulet is seized in the horrifying thing's bloody claw. Suddenly, the skeleton begins howling the same type of howling that had plagued him since he left. The narrator flees the graveyard and it is then revealed that the story is a suicide note. The narrator states that he intends to kill himself with a revolver. He believes this to be his only refuge from the crawling horror which grows within him.

"The Hound" contains several references to the body of lore known as the Cthulhu Mythos that Lovecraft shared with other horror writers. Most notably, it marks the first appearance of one of Lovecraft's most famous literary creations—the forbidden book known as the Necronomicon. Lovecraft had mentioned its author a year earlier, in "The Nameless City", but here for the first time named the book. Referring to an amulet found on a grave-robbing expedition, the narrator relates:

The reference to "Leng" is one of the first mentions of Lovecraft's imaginary plateau, having only appeared before in 1920s "Celephais". Here placed in Central Asia, Leng is also associated in Lovecraft's writings with Antarctica and his imaginary Dreamlands.

Lovecraftian scholar Will Murray, pointing to the "semi-canine face" on the amulet as well as the "corpse-eating cult" of Leng, suggests that the titular creature of "The Hound" "probably represents an early form of the ghoul as Lovecraft would develop it."