This article uses material from the Necronomicon article on the Lovecraft wiki at Fandom and is licensed under the Creative Commons Attribution-Share Alike License. 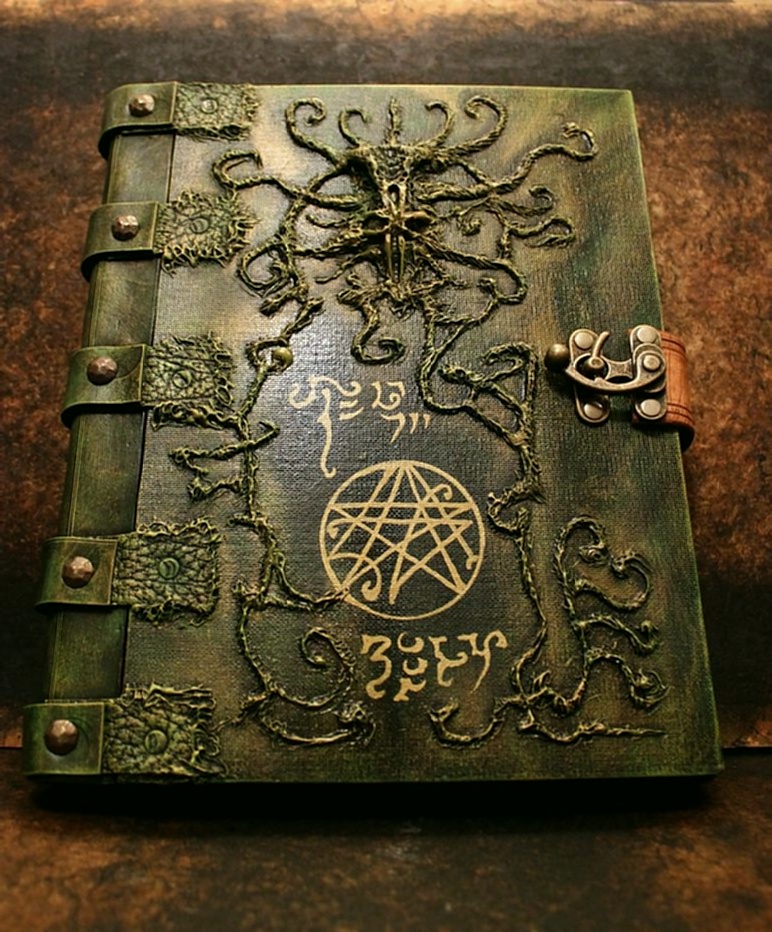 The Necronomicon is the title of a fictional book created by H.P. Lovecraft. Numerous other authors including Clark Ashton Smith, Brian Lumley, Ramsey Campbell and Keith Herber have added to its contents over the years.

The Kitab al Azif (original Arabic title of the Necronomicon) was written in the early 8th century by Abdul Alhazred. Alhazred was a poet in the court of a minor nobleman in the city of Sanaá. For reasons unknown he left the city and spent ten years wandering in the deserts. During this time he visited places such as: Irim, the City of the Pillars; the catacombs of Egypt; and the temple of Nug and Yeb in the Crimson Desert. In his old age Alhazred lived in the great city of Damascus, where he produced the Kitab al Azif. In the long years that followed many translations of this great work have been made.

Among other topics, the book includes:

Here follows a small selection of quotes from various translations of the Necronomicon:

---Excerpt from the Kitab al Azif.

...Verily do we know little of the other universes beyond the gate which YOG-SOTHOTH guards. Of those which come through the gate and make their habitation in this world none can tell; although Ibn Schacabao tells of the beings which crawl from the Gulf of S'ghlhuo that they may be known by their sound. In that Gulf the very worlds are of sound, and matter is known but as an odor; and the notes of our pipes in this world may create beauty or bring forth abominations in S'glhuo. For the barrier between haply grows thin, and when sourceless sounds occur we may justly look to the denizens of S'glhuo. They can do little harm to those of Earth, and fear only that shape which a certain sound may form in their universe...

...Men know him as the Dweller in Darkness, that brother of the Old Ones called Nyogtha, the Thing that should not be. He can be summoned to Earth's surface through certain secret caverns and fissures, and sorcerers have seen him in Syria and below the black tower of Leng: from the Thang Grotto of Tartary he has come ravening to bring terror and destruction among the pavilions of the great Khan. Only by the looped cross, by the Vach-Viraj incantation, and by the Tikkoun elixir may he be driven back to the nighted caverns of hidden foulness where he dwelleth...

. . . from the space which is not space, into any time when the Words are spoken, can the holder of the Knowledge summon The Black, blood of YibbTstll, that which liveth apart from him and eateth souls, that which smothers and is called Drowner. Only in water can one escape the drowning; that which is in water drowneth not . . .

Nor is it to be thought that man is either the oldest or the last of earth's masters, or that the common bulk of life and substance walks alone. The Old Ones were, the Old Ones are, and the Old Ones shall be. Not in the spaces we know, but between them, they walk serene and primal, undimensioned and to us unseen. Yog-Sothoth knows the gate. Yog-Sothoth is the gate. Yog-Sothoth is the key and guardian of the gate. Past, present, future, all are one in Yog-Sothoth. He knows where the Old Ones broke through of old, and where They shall break through again. He knows where They had trod earth's fields, and where They still tread them, and why no one can behold Them as They tread. By Their smell can men sometimes know Them near, but of Their semblance can no man know, saving only in the features of those They have begotten on mankind; and of those are there many sorts, differing in likeness from man's truest eidolon to that shape without sight or substance which is Them. They walk unseen and foul in lonely places where the Words have been spoken and the Rites howled through at their Seasons. The wind gibbers with Their voices, and the earth mutters with Their consciousness. They bend the forest and crush the city, yet may not forest or city behold the hand that smites. Kadath in the cold waste hath known Them, and what man knows Kadath? The ice desert of the South and the sunken isles of Ocean hold stones whereon Their seal is engraver, but who hath seen the deep frozen city or the sealed tower long garlanded with seaweed and barnacles? Great Cthulhu is Their cousin, yet can he spy Them only dimly. Iä! Shub-Niggurath! As a foulness shall ye know Them. Their hand is at your throats, yet ye see Them not; and Their habitation is even one with your guarded threshold. Yog-Sothoth is the key to the gate, whereby the spheres meet. Man rules now where They ruled once; They shall soon rule where man rules now. After summer is winter, after winter summer. They wait patient and potent, for here shall They reign again.

The Arabic manuscripts are faithful reproductions of Abdul al Alhazred 's original. These version are written upon scrolls and preserved in codices. All in all its contents total over one thousand pages complete with star charts, formula tables and astrological maps.

In 950 AD Theodore Philétas of Constantinople made a Greek translation of the Kitab al Azif. This volume was named the Necronomicon after its opening words. Despite a few errors Philétas's reproductions of the book's charts and tables are faithful to Alhazred 's original illustrations. In 1050 the Patriarch Michel had many of copies of the book burnt.

Sometime between 1501 and 1550 the Italian Aldus Manutius commissioned the printing of around one hundred folio sized copies of Philétas's Greek translation.

Interestingly, the Greek translation contains a spell not present in the original. It is a formula used to open a Gate under Memphis through which the black sphinx; one of the million favoured ones, may enter the world. It is unknown whether Philétas added this spell of his own accord or if it had been added to his Arabic version by a previous owner.

A Latin translation of Philétas's Greek version was made in 1228 by a Dominican monk named Olaus Wormius (no relation to the 16th century Danish physician Ole Worm). Unfortunately Wormius's beautifully stylised illustrations robbed many of the star charts of their accuracy. This edition was widely printed up until Pope Gregory IX outlawed it, after which many copies were destroyed.

The Latin translation was reprinted in 1477 by a German publisher. The production was printed in black letter and a number of woodcuts were added.

Another reprint was made in Spain during the year of 1662. Both this and the above version were 802 page long folios.

While staying at the home of a Baron Hauptman the famed occultist Doctor John Dee made an English translation from Hauptman's Greek copy. Dee's translation is garbled and in many places he has changed outright the meaning of certain things to fit with in his own Enochian beliefs. Never the less, his translations of many of the spells remains accurate. This version exists only in manuscript form.

Baron Frederic of Sussex produced a supposed translation in illuminated manuscript form. This translation is rife with inaccuracies and fanciful ideas added by the author. It contains such outlandish misconceptions as Cthulhu being a manifestation of Nyarlathotep, and Abhoth having created the solar system. Although this "translation" is commonly called The Sussex Manuscript its proper title is Cultus Maleficarum.

Doctor Friedrich Wilhelm von Junz made a translation from an unknown Greek copy. This translation may have been published eight years after his death 1840 but there little further details.

In 1901 the noted occultist Joachim Ferry produced a pamphlet on the book. It is mostly made up of translated quotes from the Latin version, augmented by pages of notes and speculation on their meaning. The accuracy of this publication was called into question when Ferry freely admitted including excerpts from his own dreams.

The Necronomicon, appears in the Trilogy of films, known as the Evil Dead Series. It is described as being "bound in flesh, and writ in human blood" and has a mutilated face as the cover.