This article uses material from the Nyarlathotep article on the Lovecraft wiki at Fandom and is licensed under the Creative Commons Attribution-Share Alike License. 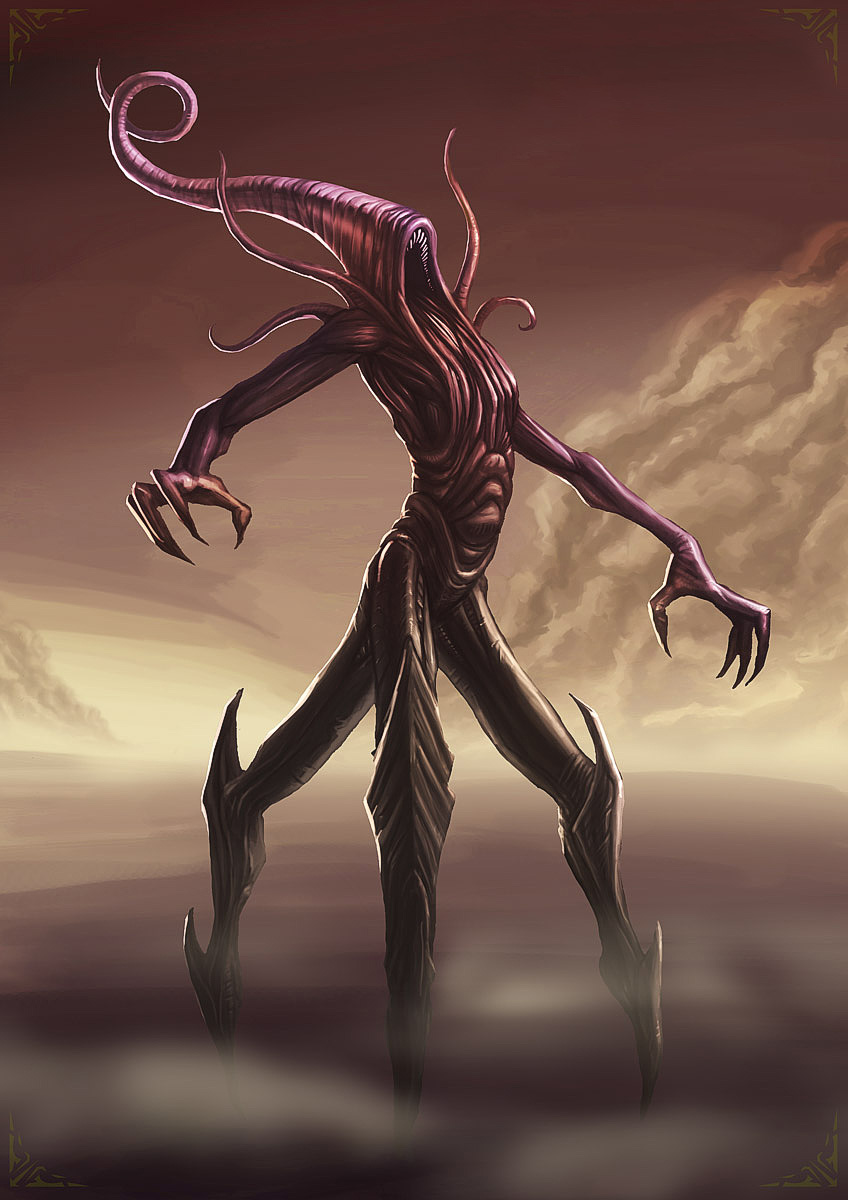 Nyarlathotep, known to many by his epithet The Crawling Chaos, is an Outer God in the Cthulhu Mythos. He is the spawn of Azathoth. He is the creation of H. P. Lovecraft and first appeared in his prose poem "Nyarlathotep" (1920).

Nyarlathotep differs from the other deities in the Mythos in a number of ways. Most of the Outer Gods are exiled to the stars, like Yog-Sothoth and Azathoth, and most of the Great Old Ones are sleeping and dreaming like Cthulhu; Nyarlathotep, however, is active and frequently walks the Earth in the guise of a human being, usually a tall, slim, joyous man. He has "a thousand" other forms and manifestations, most reputed to be quite horrific and sanity-blasting.

Most of the Outer Gods have their own cults serving them; Nyarlathotep seems to serve these cults and take care of their affairs in the other Outer Gods' absence. Most Outer Gods use strange alien languages, while Nyarlathotep uses human languages and can easily pass for a human being if he chooses to do so. Finally, most of them are all-powerful yet evidently without clear purpose or agenda, yet Nyarlathotep seems to be deliberately deceptive and manipulative, and even uses propaganda to achieve his goals. In this regard, he is probably the most human-like among the Outer Gods.

Nyarlathotep enacts the will of the Outer Gods, and is their "messenger, heart and soul"; he is also the servant of Azathoth, whose fitful, spastic wishes he immediately fulfills. Unlike the other Outer Gods, spreading madness is more important and enjoyable than death and destruction to Nyarlathotep. It is suggested by some that he will destroy the human race and possibly the earth as well.

Nyarlathotep's first appearance is in the eponymous short story by Lovecraft (1920), in which he is described as a "tall, swarthy man" who resembles an Egyptian Pharaoh. In this story he wanders the earth, gathering legions of followers through his demonstrations of strange and seemingly magical instruments, the narrator of the story among them. These followers lose awareness of the world around them, and through the narrator's increasingly unreliable accounts the reader gets a sense of the world's utter collapse. The story ends with the narrator as part of an army of servants for Nyarlathotep.

Nyarlathotep (usually referred to in conjunction with the subnomen, "The Crawling Chaos") subsequently appears as a major character in The Dream Quest of Unknown Kadath (1926/27), in which he again manifests in the form of an Egyptian Pharaoh when he confronts protagonist Randolph Carter. He is here depicted as an avatar of the Other Gods, executing their will on Earth and in Dreamland.

The twenty-first sonnet of Lovecraft's poem-cycle Fungi from Yuggoth (1929/30) – not to be confused with the entities identified as the fungi from Yuggoth, or Mi-Go in "The Whisperer in Darkness" – is dedicated to Nyarlathotep, and is substantially a poetic retelling of the short story "Nyarlathotep."

In "The Dreams in the Witch House" (1933), Nyarlathotep appears to Walter Gilman and witch Keziah Mason (who has made a pact with the entity) in the form of "the 'Black Man' of the witch-cult," a black-skinned avatar with the appearance of the Christian Devil associated with New England witchcraft lore.

Finally, in "The Haunter of the Dark" (1936), the being of pure darkness dwelling, possessing a "three-lobed eye", in the steeple of the Starry Wisdom sect's church is identified as another form, or manifestation of, Nyarlathotep.

Though Nyarlathotep appears as a character in only four stories and one sonnet (still more than any other Great Old Ones or Outer Gods), his name is mentioned frequently in numerous others. For example, in "The Whisperer in Darkness" Nyarlathotep's name is spoken frequently by the fungi from Yuggoth in a reverential or ritual sense, indicating that they worship or honor the entity.

Despite similarities in theme and name, Nyarlathotep does not feature at all in Lovecraft's story "The Crawling Chaos," (1920/21) an apocalyptic narrative written in collaboration with Elizabeth Berkeley.

In the Lovecraft Circle Myth Cycles

In the Clark Ashton Smith's Hyperborean cycle, he is said to be spouse of the Elk-Goddess Yhoundeh

In a 1921 letter to Reinhardt Kleiner, Lovecraft related the dream he had had — described as "the most realistic and horrible [nightmare] I have experienced since the age of ten" — that served as the basis for his prose poem "Nyarlathotep". In the dream, he received a letter from his friend Samuel Loveman that read:

Will Murray suggests that this dream image of Nyarlathotep may have been inspired by the inventor Nikola Tesla, whose well-attended lectures did involve extraordinary experiments with electrical apparatus, and whom some saw as a sinister figure.

Robert M. Price proposes that the name Nyarlathotep may have been subconsciously suggested to Lovecraft by two names from Lord Dunsany, an author he much admired: Alhireth-Hotep, a false prophet from Dunsany's The Gods of Pegana, and Mynarthitep, a god described as "angry" in his "The Sorrow of Search".

In 1996, Chaosium published The Nyarlathotep Cycle, a Cthulhu Mythos anthology focusing on works referring to or inspired by the entity Nyarlathotep. Edited by Lovecraft scholar Robert M. Price, the book includes an introduction by Price tracing the roots and development of the God of a Thousand Forms. The contents include:

As one of H.P. Lovecraft's most famous creations, Nyarlathotep has appeared in and been referenced by numerous other works in popular culture.