This article uses material from the Dagon (short story) article on the Lovecraft wiki at Fandom and is licensed under the Creative Commons Attribution-Share Alike License. 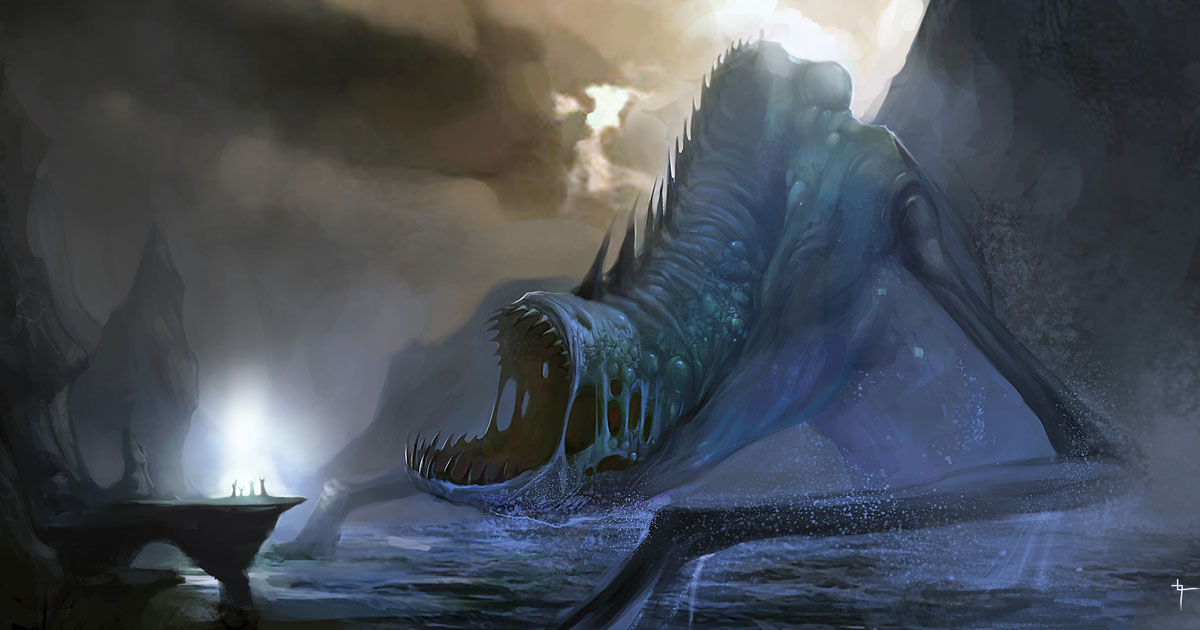 Dagon
Read this story in the library

Dagon is a short story by H. P. Lovecraft, written in July, 1917. It is one of the first stories he wrote as an adult, and was first published in the November 1919 edition of The Vagrant (issue #11). Later, in October of 1923, Dagon was published in Weird Tales. To some people Dagon is one of Lovecraft's most forward-looking stories. It has many elements that foreshadow future stories such as The Call of Cthulhu and The Shadow Over Innsmouth, and the title is an allusion to Dagon, a Great Old One who would appear in subsequent works.

The story was inspired in part by a dream he had. "I dreamed that whole hideous crawl, and can yet feel the ooze sucking me down!" he later wrote.

Critic William Fulwiler indicates that Lovecraft may have been influenced by Irvin S. Cobb's Fishhead, a story about a strange fish-like human. Fulwiler has also suggested that Lovecraft took the story's theme of "an ancient prehuman race that will someday rise to conquer humanity" from Edgar Rice Burroughs' At the Earth's Core (1914).

The story mentions Piltdown Man, which had not been exposed by the scientific community as a fraud and hoax at the time of writing.

The story is the testament of a tortured, morphine-addicted man who plans to commit suicide over an incident that occurred early on in World War I when he was a merchant marine officer.

In the unnamed narrator's account, his cargo ship is captured by a German sea-raider in "one of the most open and least frequented parts of the broad Pacific." He escapes on a lifeboat and drifts aimlessly across the sea "somewhat south of the equator" until he eventually finds himself inexplicably stranded on "a slimy expanse of hellish black mire which extended about me in monotonous undulations as far as I could see.... The region was putrid with the carcasses of decaying fish, and of other less describable things which I saw protruding from the nasty mud of the unending plain." He speculates that this land mass could be "a portion of the ocean floor... thrown to the surface" by a volcanic upheaval, "exposing regions which for innumerable millions of years had lain hidden under unfathomable watery depths."

After waiting three days for the seafloor to dry out sufficiently to walk on, he strikes out on foot to find the sea and possible rescue. After two days of walking, he reaches his goal, a "hummock" that turns out to be a mound on the edge of an "immeasurable pit or canyon". Descending the slope, he sees a gigantic white stone object that he soon perceives to be a "well-shaped monolith whose massive bulk had known the workmanship and perhaps the worship of living and thinking creatures."

The monolith, situated next to a channel of water in the bottom of the chasm, is covered in unfamiliar hieroglyphs "consisting for the most part of conventionalised aquatic symbols such as fishes, eels, octopuses, crustaceans, molluscs, whales and the like." There are also "crude sculptures" depicting:

":men—at least, a certain sort of men; though the creatures were shewn disporting like fishes in the waters of some marine grotto, or paying homage at some monolithic shrine which appeared to be under the waves as well... they were damnably human in general outline despite webbed hands and feet, shockingly wide and flabby lips, glassy, bulging eyes, and other features less pleasant to recall. Curiously enough, they seemed to have been chiseled badly out of proportion with their scenic background; for one of the creatures was shown in the act of killing a whale represented as but little larger than himself.

As the narrator looks on the monolith, a creature emerges from the water:

Insane with fear, the mariner flees back to his stranded boat, and vaguely recalls a "great storm".

His next memory is of a San Francisco hospital, where he was taken after being rescued in mid-ocean by a U.S. ship. There are no reports of any Pacific upheavals, and he does not expect anyone to believe his incredible story. He mentions one abortive attempt to gain understanding of his experience:

Haunted by visions of the creature, "especially when the moon is gibbous and waning", he describes his fears for the future of humanity:

With the drug that has given him "transient surcease" running out, he declares himself ready to do himself in; the narrative is revealed to be a suicide note. The story ends with the narrator rushing to the window as he hears "a noise at the door, as of some immense slippery body lumbering against it."