This article uses material from the Wilbur Whateley article on the Lovecraft wiki at Fandom and is licensed under the Creative Commons Attribution-Share Alike License. 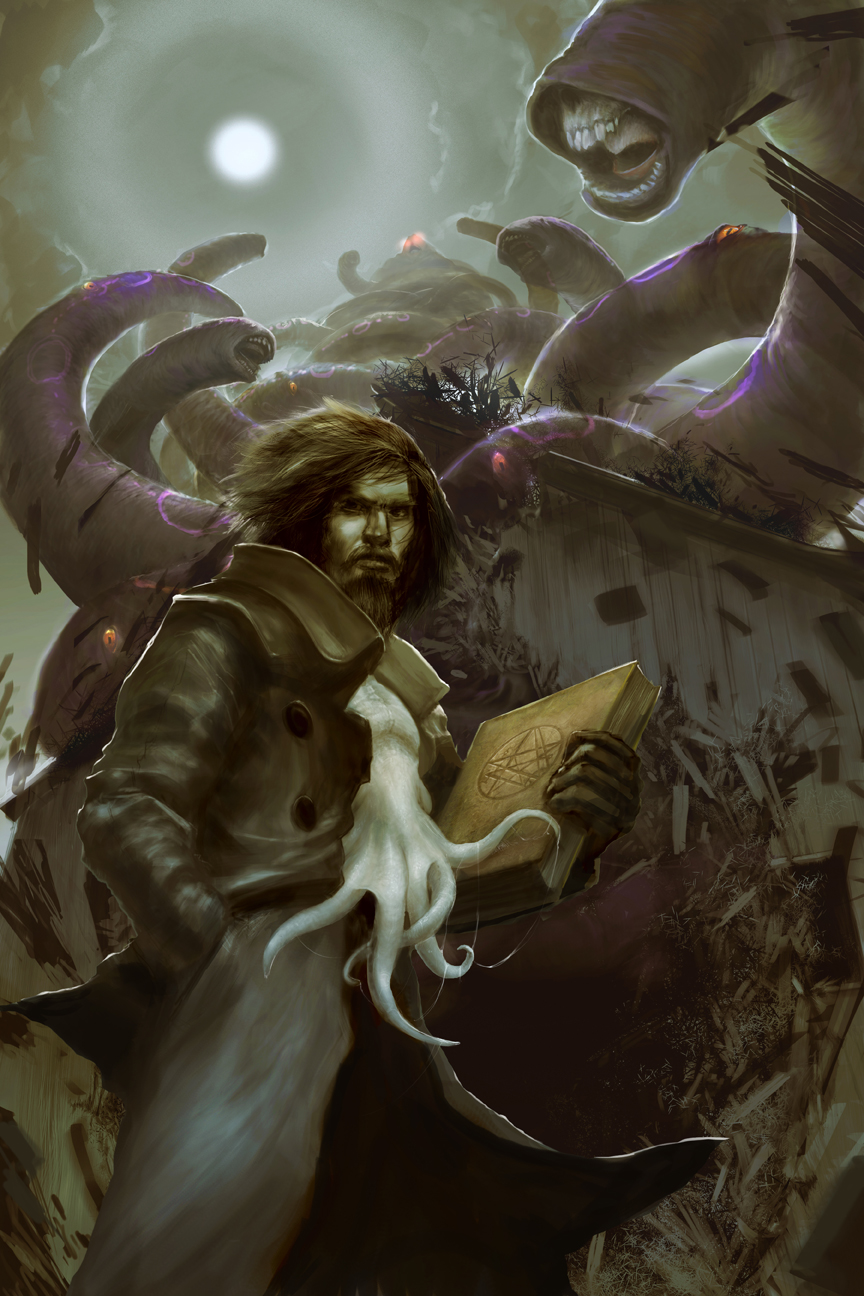 Wilbur Whateley is a Dunwich inhabitant who plays a central role in The Dunwich Horror.

In the rural town of Dunwich, Massachusetts on February 2, 1913 at 5 a.m. Lavinia Whateley gave birth to a son, Wilbur Whateley. The date of his birth is noted for the night before the hills rumbled and dogs barked incessantly. Dogs continued to show an instinctual hatred for him for the remainder of his life. Wilbur was immediately recognized for his hideousness, described as a "dark, goatish-looking infant".

He displayed unnaturally rapid physical and mental development: At seven months he could walk unassisted and eleven months could speak. At four and a half, he appeared fifteen and he began to grow facial hair. "Though he shared his mother's and grandfather's chinlessness, his firm and precociously shaped nose united with the expression of his large, dark, almost Latin eyes to give him an air of..well-nigh preternatural intelligence,.. something almost goatish or animalistic about his thick lips, large-pored, yellowish skin, coarse crinkly hair, and oddly elongated ears."

At a young age he takes to wearing very coversome clothes. He also has revolting odor, a defining characteristic of the Great Old Ones. Wilbur's voice is distinctive for its "Strange, resonant fashion which hinted at sound-producing organs unlike the run of mankind's". This presumably allows him to speak the language of the Great Old Ones. At 15 years he had grown to 9 feet tall and showed no sign of stopping.

Prior to his grandfather’s death he left him with the responsibility of raising his twin as well as ensuring he opens the gates to Yog-Sothoth. He could only accomplish this by finding the summoning ritual on page 751 of the Necronomicon. He then travelled to the Miskatonic, Cambridge, and Widener libraries in search of a complete version of this book. They all, under the guidance of Dr. Armitage, denied him access. He was then forced to return to Miskatonic University to steal their copy. This attempt ultimately proves his downfall, when a watchdog savagely kills him. It succeeded soley because Whateley's revolver failed to fire.

It is then that several disturbing truths of his biology were revealed. In place of blood he had a greenish-yellow ichor. Yellow and black markings covered his back. From the waist down his body was covered in coarse black fur. A sort of rudimentary eye was positioned on each hip.

His final words were the excerpt from the Necronomicon which he had been searching. Immediately afterward his corpse disintegrated into a sticky white mass, appearently having no true skeletal structure. Out the window a swarm of Whippoorwills were heard shrieking in anticipation for his soul. They soon fled after witnessing their intended prey. Afterward his diary and the contents of his library were transported to Miskatonic University to be studied.

Wilbur Whateley was a central character in the 1970 film The Dunwich Horror.