This article uses material from the Celephaïs article on the Lovecraft wiki at Fandom and is licensed under the Creative Commons Attribution-Share Alike License. 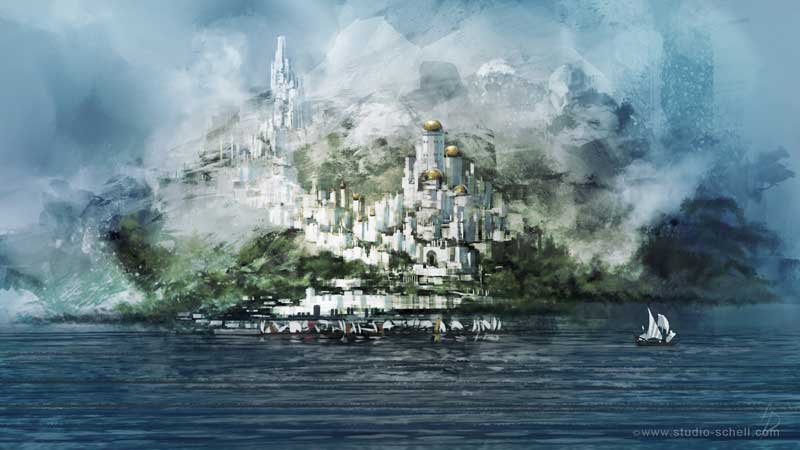 Celephais
Read this story in the library

"Celephaïs" is a fantasy story by American horror fiction writer H. P. Lovecraft, written in early November 1920 and first published in the May 1922 issue of the Rainbow.

Like many of Lovecraft's stories, "Celephaïs" was inspired by a dream, recorded in his commonplace book as "Dream of flying over city."

The story resembles a tale by Lord Dunsany, "The Coronation of Mr. Thomas Shap" in The Book of Wonder, in which the title character becomes more and more engrossed in his imaginary kingdom of Larkar until he begins to neglect business and routine tasks of daily living, and ultimately is placed in a madhouse. The imagery of the horses drifting off the cliff may derive from Ambrose Bierce's "A Horseman in the Sky" (1891).

Celephaïs was created in a dream by Kuranes (which is his name in dreams—his real name is not given) as a child of the English landed gentry. As a man in his forties, alone and dispossessed in contemporary London, he dreams it again and then, seeking it, slowly slips away to the dream-world. Finally knights guide him through medieval England to his ancestral estate, where he spent his boyhood, and then to Celephaïs. He became the king and chief god of the city, though his body washes up by his ancestors' tower, now owned by a parvenu.

In The Dream-Quest of Unknown Kadath, Randolph Carter pays a visit to Kuranes, finding that the great dreamer has grown so homesick for his native Cornwall, he has dreamed parts of Celephaïs to resemble the land of his boyhood. Kuranes advises Carter, on a mission to find his own dream-city, to be careful what he wishes for—he might get it.

In the original short story, Celephaïs described as being situated in the valley of Ooth-Nargai beside the Cerenerian Sea. Its most remarkable feature is that it is unaffected by the passage of time, and takes no decay or wear, so that a person may leave it and return many years later to find that nothing has changed.

Important landmarks in Celephaïs are the turquoise temple of Nath-Horthath and the Street of Pillars. Nearby rises snow-capped Mount Aran, whose lower slopes are replete with ginkgo trees.

Galleys from the port of Celephaïs go everywhere in the Dreamlands, but especially to the cloud-kingdom Serannian, reaching its harbor by sailing into the sky where the Cerenerian Sea meets the horizon.